Coming to the Ramor Theatre from next Thursday, April 22, is Emerald Germs of Ireland. This black comedy started life as a novel by Clones writer Pat McCabe, and this Livin’ Dred production is devised and performed by Aaron Monaghan and Padraic McIntyre, both founding members (together with Mary Hanley) of the Ramor Theatre-based professional theatre company.

Emerald Germs Of Ireland tells the story of Pat McNab, part serial killer and part mammy’s boy, often found propping up the counter in his local or belting out a tune on his mother’s knee (the pair singing away like a two-headed jukebox). When McNab goes over the edge, his mission is to annihilate Ireland of germs – including his parents, neighbours and visitors to his native village in the border area of Ireland.

McCabe’s The Butcher Boy (which was made into a film by renowned director, Neil Jordan), often brings up a music book titled Emerald Gems of Ireland. The writer explains how ‘gems’ became ‘germs’.

“It started off as a book of stories/songs called Emerald Germs Of Ireland. They were kind of books, which were on everybody’s piano on the 1950s or 1960s, only it would have been Emerald Gems Of Ireland,” says McCabe, spelling out the ‘r’ that he’s menacingly inserted into the word ‘gems’. “You’d have songs in there like The Turfman From Ardee, The Homes Of Donegal, all those kind of songs. What I’ve done is taken the mood of the different songs and written a story around each of them. Some of them are waltzes, some are quick-step, in other words the language is fast in one, mid in another, and if there was a ceili, it’d be a wild one. It’s all meant to be very funny so they’re kind of humorous ballads on stage,” he explains.

With the over-the-edge, serial killer main character, however, audiences may well be screaming inside as they laugh along at the antics on stage.

“It’s kind of MTV for the 1940s or, you could say, old-time radio for the 21st century, with the theme from Psycho running through The Homes Of Donegal,” says McCabe. “The one thing that we’re not doing is taking the easy road of social satire. It’s kind of darker and more colourful at the same time than that. It covers maybe 50 or 60 years, but also probes the Irish psyche through song. Maybe that’s what it’s really doing.”

Emerald Germs of Ireland won’t be the first time Livin’ Dred have worked with McCabe.

The production of McCabe’s The Dead School for which Livin’ Dred and Nomad partnered was regarded as one of the theatrical highlights of 2008. It was nominated for three Irish Times Theatre Awards, including best production, and recently completed a three-week sell-out run at The Tricycle Theatre in London.

McCabe and McIntyre were delighted with the result of this collaboration, so are more than happy to work together again.

“I worked with Padraic on The Dead School so I know how he works. He doesn’t take anything for granted and he doesn’t take the easy road,” says McCabe. So was he happy with the result?

“Of course I was. No-one expected that, least of all me. And it doesn’t happen that often I can tell you.”

When The Anglo-Celt went out to the Ramor Theatre to meet up with Padraic and Aaron, their work on the play was at an exciting and promising mish-mash stage of rehearsing scenes, devising scenes, practising lines, changing lines and, they admitted, trying to figure out where it was all going.

Padraic says The Dead School was “probably the most enjoyable thing I’ve ever worked on, and the most frightening in ways because it was just so big”.

Working with McCabe was “fantastic”.

“He’s probably the most generous writer I’ve worked with in that he knows exactly what he wants in a way but it’s up to you to find how to deliver that. He’s very specific in what he wants from the end result, but he’s prepared to let you play which is a dream for an actor or director.”

At the time of meeting them, there were less than three weeks to go until the opening night, and Padraic and Aaron were an adrenaline-producing combination of determined, ambitious, perfectionist, concerned and excited about the production in hand.

“We’re finding with Emerald Germs as well as The Dead School, there’s a key you have to get to unlock it, to even the style of it. Once you get that, things begin to fall into place,” says Padraic.

“I think this morning, we found a half a key and we think we’re in with this one now. I didn’t sleep last night because I was just thinking that we’ve two-and-a-half more weeks from today. We don’t even have a play, never mind a production.

“We’re trying to put a structure on it. There’s two of us and lots of characters…”

The actors have been in close contact with McCabe, emailing ideas over and back and he’s joining them for the final two weeks of rehearsals to pull it all together.

Their passion for the job in hand is palpable, and they’re admirers of McCabe’s work.

Says Padraic, “He has a dark energy, always tongue-in-cheek. In this there are murders – whether McNab commits them or not is up for debate – but they are absolutely hilarious. That’s what McCabe’s great at, he can turn the slightest little thing into a drama.

Aaron agrees, “The smallest little conversation can become very dangerous, all of a sudden, with one word; and then the most heinous of murders can become very hilarious and un-dangerous.”

Aaron has been busy performing alongside actors such as Stephen Rea and Derbhle Crotty (also from Co. Cavan) accumulating awards for his work with the Abbey Theatre and Druid since he last performed with Livin’ Dred in The Tinkers Curse in 2007.

While the exchange about what stage the play is at is quite comical, because Padraic and Aaron seem a combination of sleep-deprived and bewildered, given their credentials and critically acclaimed track record, one can’t help but think they are more confident about the task than they are letting on.

“I suppose it’s hard to explain because we’re not there yet; we’re in the process of finding it,” says Padraic, when asked what it’s all about. “We’ll be there in two-and-a-half weeks… and just the two of us,” he says with a half laugh.

“I’m finding it terrifying as well, but I’m having a great time. We’re getting to have fun and make a play out of it,” says Aaron.

But they’re understating your self-belief? They’re totally confident about the play?

“No!” is the resounding answer, in stereo.

“Because you take a play by any writer in script form and it’s ready to go; you know this thing works on most levels; what you have to do is cast it right and get pace and tempo and stuff up to speed. With this, we don’t even know if we have the nugget of gold of the play; it’s all exploration,” explains Padraic. “That’s what keeps you awake at night but it’s also what gets you out of the bed early in the morning to try to go in to go ‘aaaah, I think I’ve cracked this one nut’, and there will be millions of them to crack along the way… No, I’m certainly not confident. I was more confident when we started, before we started!”

One wonders if they’re like two school-boys in improvisation class being given a free reign to use their own imagination?

“We’re like boys in school who the teacher hasn’t arrived back to yet,” says Padraic referring to McCabe. “He’ll be here next week, not with a stick, but he’ll want to embellish what we’ve come up with.”

One of the key embellishments that McCabe will be adding is the music. In the novel, each chapter begins with an Irish folk song, and it is a vital part of the play too, as McCabe explains.

So we’re not talking Jedward, then?!

“Oh you can bet your life it’ll not be like Jedward!” says McCabe.

One of McCabe’s aims is audience enjoyment, but there is a more serious aspect to Emerald Germs Of Ireland too. He explains by making reference to Chesterton’s epic poem, The Ballad of the White Horse:

“If we start off, first of all, with a really good time for all the audience, but also perhaps, a kind of cautionary note in behind every one of these songs. Ireland is in a funny place at the moment. It’s a country known for its hilarity but it also has, it seems to me, difficulty coping with, shall we say, problems.

“There’s a kind of GK Chesterton thing – all their wars were merry, all their songs were sad – so in every one of those ballads, there’s a hilarity but there’s also a sadness. So while everybody’s having a good time, we also want them to go home, maybe, thinking.”

McCabe puts to bed any notions that McNab is his own alter ego:

“Hmmmm, no. Mischievously I could say yes, but no, really the alter ego is of the songs. When everybody whistles this song, they may be whistling a different tune than they really think they’re whistling. So it’s as much to do with the alter ego of Irish rural mind.”

So when they hear one of these songs after they see Emerald Germs Of Ireland, they might think of it differently?

“They mightn’t whistle it at all.”

Emerald Germs of Ireland at the Ramor Theatre. Preview on Thursday, April 22; Performances on Friday, Saturday and Sunday, April 23, 24 & 25 and on Thursday, Friday and Saturday, April 29 & 30 and May 1.

“I’m finding it terrifying as well, but I’m having a great time. We’re getting to have fun and make a play out of it” 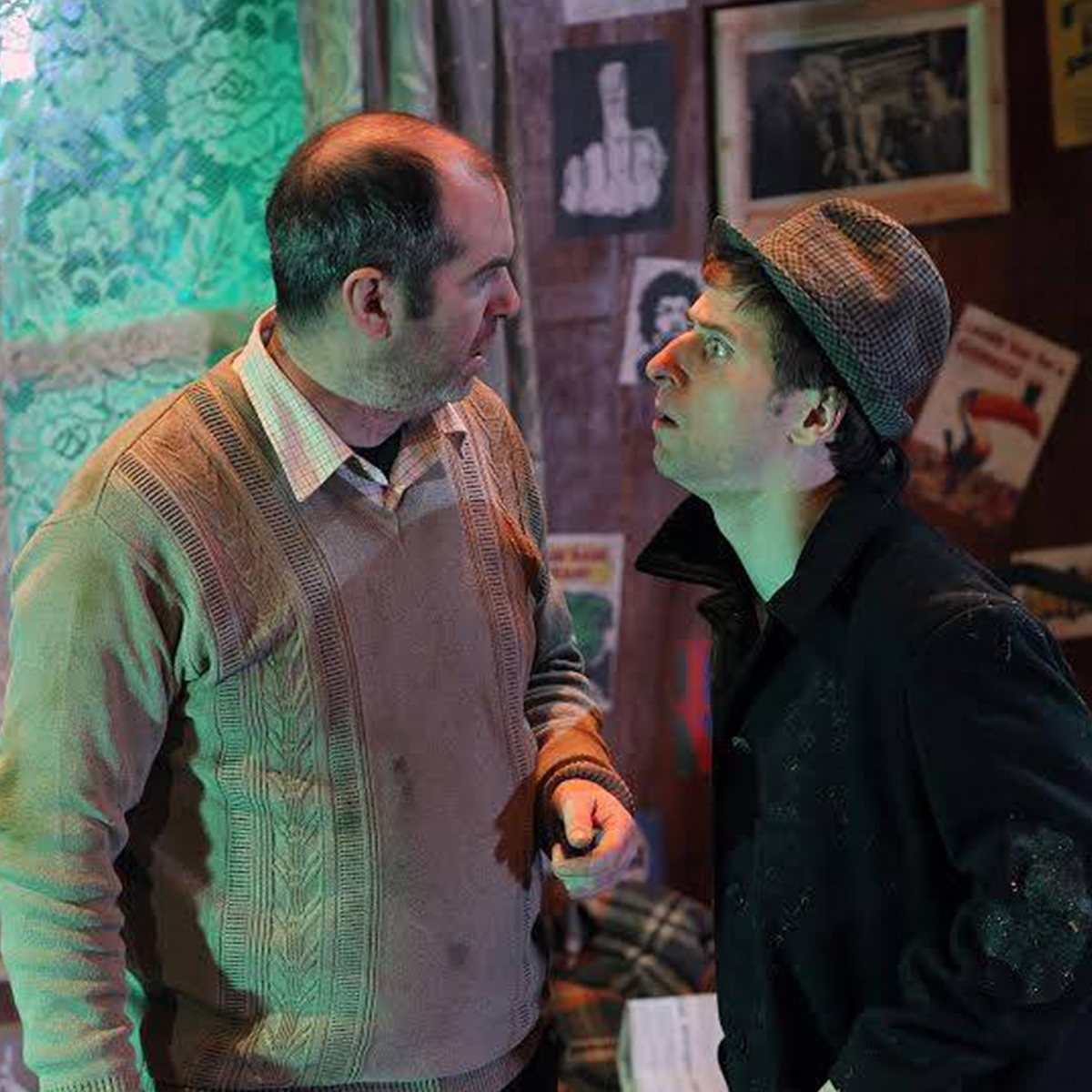 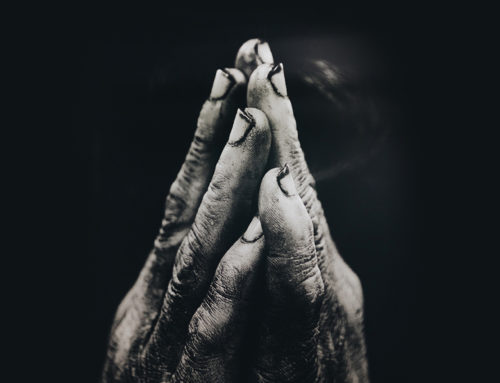 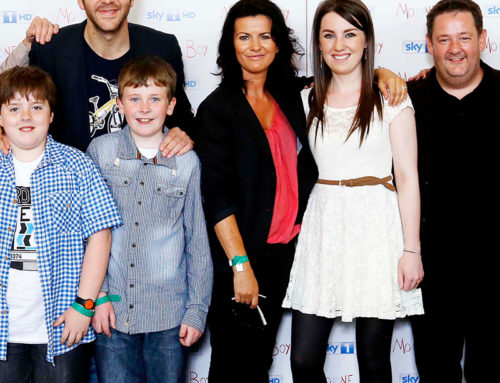 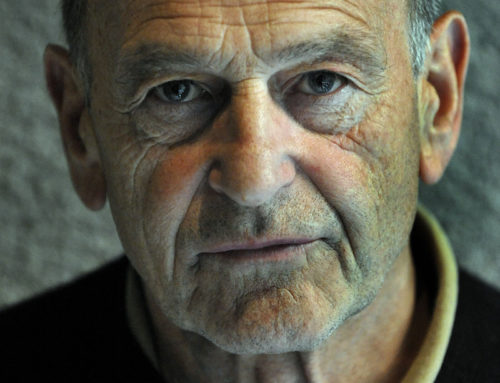 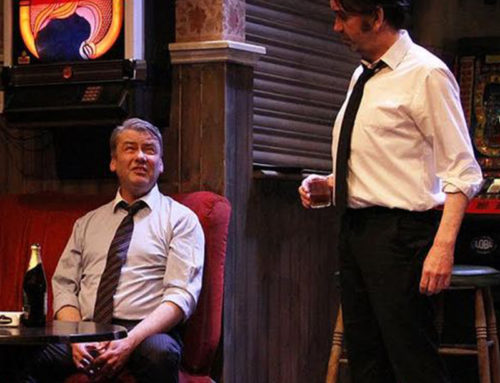 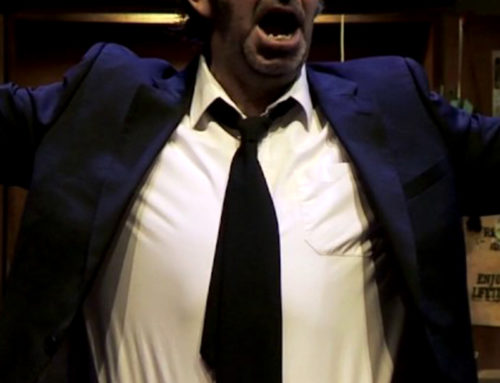